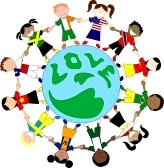 German National Exam
The National German Exam is administered each year to nearly 24,000 high school students in the second, third and fourth level of German. The Exam, now in its 53rd year, provides individual diagnostic feedback, rewards students through an extensive prize program, and creates a sense of accomplishment.


This is the 7th year that the German Department has given this assessment.

Award II: Graduating seniors receive round-trip group transportation from Newark or New York to Germany, spend 3-4 weeks living there, where they are placed in groups with international students. In addition to a homestay program, they also attend special seminars in other locations within Germany.


Latin National Exam
The philosophy of the National Latin Exam is predicated on providing every Latin student the opportunity to experience a sense of personal accomplishment and success in his study of the Latin language and culture. This opportunity exists for each individual student since, on the National Latin Exam, he is not competing with his fellow student on a comparative basis, but is evaluated solely on his own performance on the exam. The basic purposes of the NLE are to promote the study of Latin and to encourage the individual student.


This is the 12th year that the Latin Department has given this assessment.

Spanish National Exam
the National Spanish Examination (NSE), a division of the American Association of Teachers of Spanish and Portuguese (AATSP), is commited to recognizing student achievement and promoting language proficiency in the study of Spanish.

This is the first year that the Spanish Department has given this assessment.
Online testing 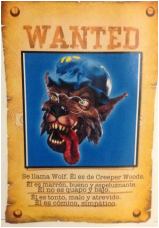 The photo to the left and the videos below are examples of student work in Mrs. Wishard's
Career Magnet Spanish Classes

Students were required to create a video about their daily routine using Pinnacle or iMovie and their iPads.

*Students created video commercial advertising a Hygienic Product. (use of iPads and in target language)
- They were to create an original name for their product
- They had to describe what the product was, why it would be used, and how often to use it
- Students shared where to buy it and had to use 3 adjectives to describe it
- Lastly, students designed a slogan and took a photo of their product

*Spanish Classes are collaborating with PE classes to create a video to describe and demonstrate an exercise
- Students will be translating the muscle group, name of the exercise, and script of the step by step instructions into Spanish
- When complete, students will be in the gym watching the videos and following along with the exercises.

Ms. Wishard and her classes will be working on short videos for F&M Trust what will teach tellers key spanish phrases in order to help them provide better customer service to their spanish speaking clientele.

Honors 3 & AP classes wrote letters to pen pals in the Dominican Republic.  They were delivered by a group of students and professor from Shippensburg University.  We are waiting on the responses.

Honors 3 & AP classes are doing an Intercambio-Exchange with low level ESL students.  My students take turns going to the ESL classrooms.  They pair up and speak 10 minutes only in Spanish and 10 minutes only in English on topics given by me and the ESL teacher.  This helps both students.  They really love it!

German in the 8th grade

This course consists of Spanish and Latin concepts covered in 45 days of instruction.  The Projects below are from the Latin portion of the class. 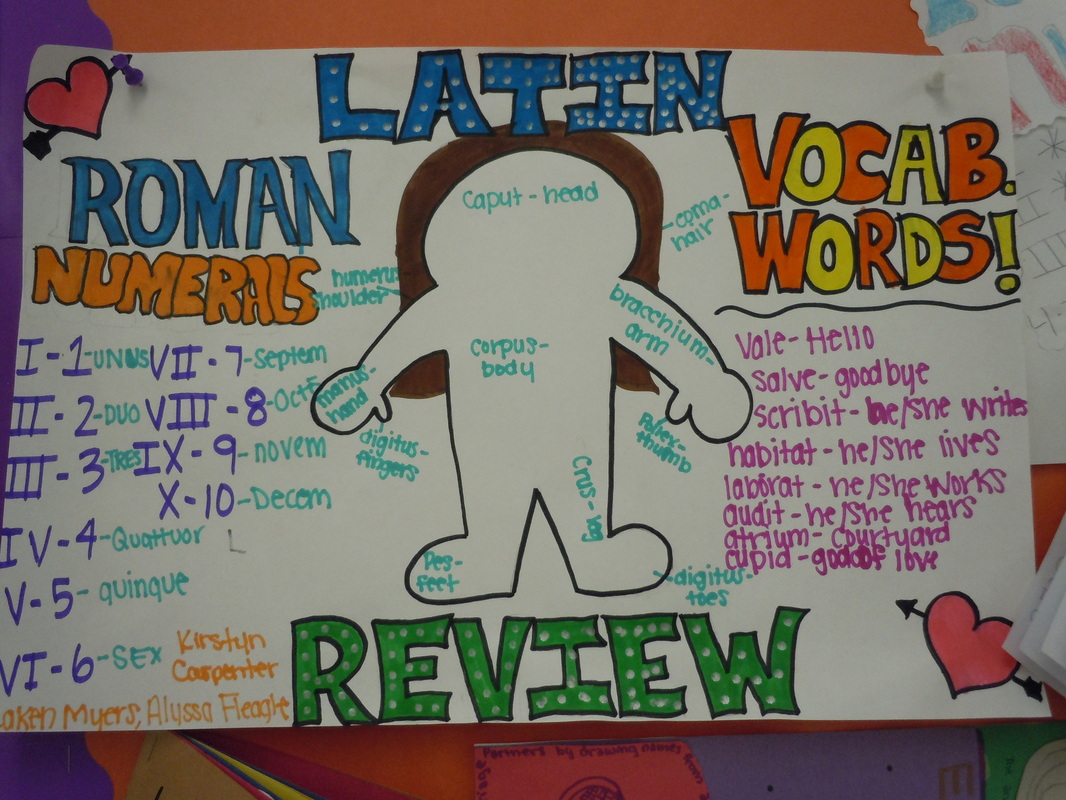 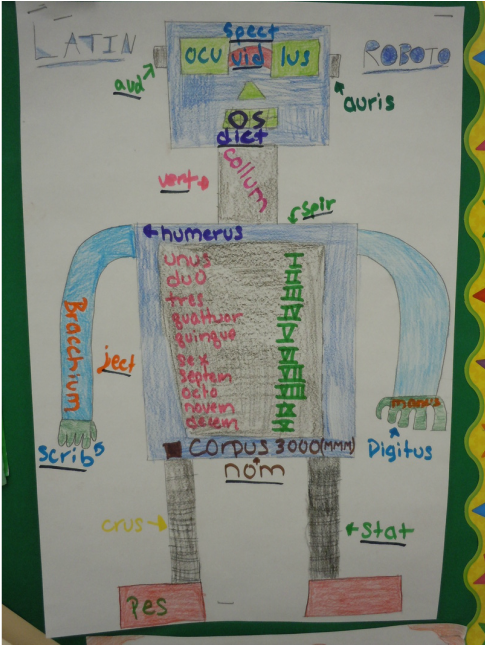 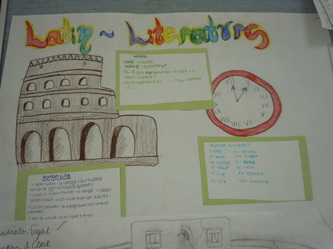 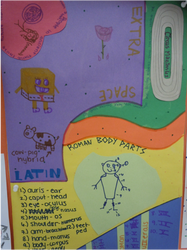 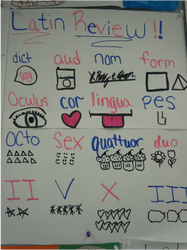 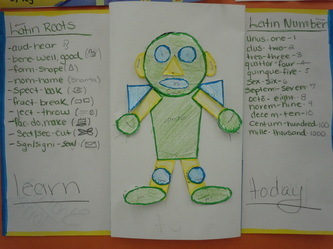 iPads in the AP Classrooms 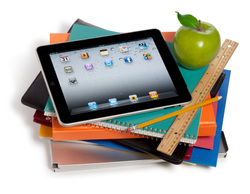 Each AP language teacher at the High School was given an iPad this year.  Mrs. Holtry, Mrs. Ausherman and Mr. Unruh are currently working on a collaborative supervision project where they are investigating useful apps for the language classroom as well as instructional strategies.

Also, with the change in position for Mrs. Holtry to Gifted, she has agreed to share the Gifted iPad cart with Mrs. Ausherman's and Mr. Unruh's AP classes to further extend the project.

Since launching Makebeliefscomix.com in late 2006, there have been over 6 million site visits from more than 175 countries to MakeBeliefsComix.com. Many of them have been educators who use the site with students to encourage writing, reading and literacy and the learning of English (or German). In fact, Google and UNESCO selected MakeBeliefsComix as one of the world's most innovative web sites in fostering literacy and reading. 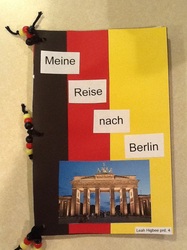 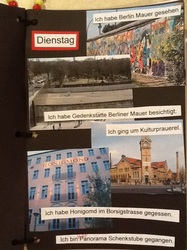 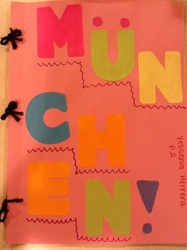 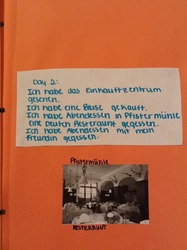 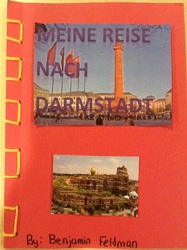 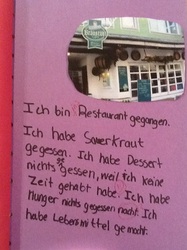 Latin I students designed t-shirts depicting a god or goddess.  On the back of the shirts, students completed a writing piece describing why they chose that god or goddess and their particular attributes. 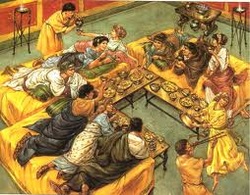 Latin II students had the opportunity to host their own cenas (dinners) during the block periods of the week of February 11th.  Classes during periods 3 and 6 sampled authentic Roman foods. 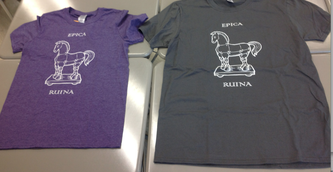